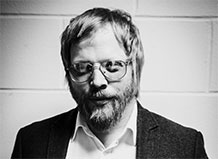 Research Fellow in the project 'Philosophy and Psychedelics'

Dr Peter Sjöstedt-Hughes is an Anglo-Scandinavian philosopher of mind who specializes in the thought of Whitehead, Nietzsche, and Spinoza, and in fields pertaining to panpsychism and altered states of mind. Following his degree in Continental Philosophy at the University of Warwick, he became a Philosophy lecturer in London for six years after which he pursued his PhD at The University of Exeter – where he is now a research fellow and lecturer. This term he is lecturing Philosophy of Mind (PSY3450 in the Psychology department), and Philosophy and Psychedelics (PHLM013/4).

Peter is the author of Noumenautics (2015), Modes of Sentience (2021), co-editor of Bloomsbury's Philosophy and Psychedelics (2022), the TEDx Talker on ‘psychedelics and consciousness‘, and he is inspiration to the inhuman philosopher Marvel Superhero, Karnak. He is creator, with Prof. Christine Hauskeller, of the Philosophy of Psychedelics Exeter Research Group:

University of Delhi talk on Spinozism and the Problems of Mind: https://youtu.be/VHzWx2C1XSs