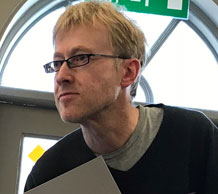 Senior Lecturer in Philosophy and Sociology

My main areas of interest and work are in social and moral philosophy. Since my degree days I have been strongly influenced by the philosophy of Ludwig Wittgenstein, especially his very latest writings in On Certainty. I am a member of the British Wittgenstein Society and sit on its Honorary Committee. In recent years I have been attempting to work out ways in which Wittgenstein’s philosophy might help illuminate areas of moral philosophy, introducing and developing the idea of moral certainty. My other main interests are in reflecting philosophically on our historical and social scientific understanding of slavery and abolition, genocide, and the Holocaust. I also have an interest in the ethics and politics of contemporary animal exploitation. My primary orientation is philosophical, but I draw and reflect on findings, theories, explanations and ideas from history and the social sciences, and philosophy of social science. I have interests in moral psychology (moral agency, moral responsibility, moral certainty, moral perception, moral and morally relevant factual ignorance) and in the badness of death and the wrongness of killing.

2021: Review of Capitalism and democracy in the twenty-first century: a global future beyond nationalism, in Contemporary Political Theory 20 115–118

2018: ‘Would Aristotle have seen the wrongness of slavery if he had undergone a course of moral enhancement?’ Royal Institute of Philosophy Supplement 83, 87-107.

2008: Review of P. Tabensky (ed.) Judging and understanding: essays on free will, narrative, meaning and the ethical limits of condemnation, Philosophical Papers 37 (1), 177-84.

2000: ‘Winch and Wittgenstein on understanding ourselves critically: descriptive not metaphysical’, Inquiry 43 (3), 289-318.

1999: Wittgenstein and the idea of a critical social theory: a critique of Giddens, Habermas and Bhaskar. London: Routledge.

From the beginning of my studies as an undergraduate, my outlook has been philosophical and oriented towards social, political and ethical issues, informed by social scientific and historical inquiry. My PhD advanced a reading of Ludwig Wittgenstein's philosophy and a critical examination of how contemporary social and political theorists have drawn upon that philosophy for their own ideas. This was developed into my first book, Wittgenstein and the idea of a critical social theory: a critique of Giddens, Habermas and Bhaskar (Routledge, 1999). I developed further my thoughts on how social and political criticism might more fruitfully proceed in 'Winch and Wittgenstein on understanding ourselves critically: descriptive not metaphysical' (Pleasants, 2000), in my chapter in Marx and Wittgenstein: knowledge, morality and politics (Routledge, 2002), and 'Social criticism for "critical critics"?' (Pleasants, 2003).

The overall theme that motivates and guides my current research is the relationship between social structure and moral agency. Within this context I have explored a range of issues arising from reflection on the phenomenon of 'institutional wrongdoing', including both explanation and moral evaluation, principally focussing on: the Holocaust and genocide; the exploitation of non-human animals; slavery, abolition and the anti-slavery and animal liberation movements. I have also been exploring the relevance and usefulness of Wittgenstein’s philosophy for ethical inquiry via the concept of ‘moral certainty'. I have drawn on this concept in critical engagement with philosophical theories on the badness of death and wrongness of killing, and in explanation of large-scale progressive moral change.  In the near future I hope to produce a book manuscript consisting in philosophical reflections on the Holocaust and genocide and their wider social implications.

Please feel free to email me to discuss any ideas you have for possible research projects – my main research interests and expertise are in:

University of Cambridge – History and Philosophy of Science (twice)

2021: Ray Auerback, 'Catastrophe testimony: bearing witness to the epistemological existential and moral chasm between survivors and the world'.

2010: Mattia Gallotti, ‘Naturally we: A philosophical study of collective intentionality’.

Tamara Leonard, ‘The relationship between victimhood and power: disempowering, over-empowering and empowering’.

Jen Smith, ‘Is rape an act of institutional wrongdoing’

Benedict Lane, ‘Moral Progress and its Problems’. Funded by AHRC.

Lara Andre, ‘Making Sense of Sentience: A Non-Anthropocentric Account of our Obligations to Future Generations’.

Callum Downes, 'Epistemic Injustice and the Radical Right: An exploration into testimonial and hermeneutical injustice'

I left school at 16 - as one did at the Secondary Modern school I attended (having been classified as unsuited for academic pursuits by the selection test of the tripartite education system that used to operate in the British State sector before comprehensivisation). I did various jobs for the next eight years: mink farm, road haulage company, meat-processing factory. In the last two of those years I took evening classes in 'O' level maths and 'A' level sociology (my education had supposedly given me practical life-skills, and prepared me for the world of semi-skilled work, but hadn't given me much formal qualification apart from a few CSEs). Having liked the taste of academic education, I resigned from my job in a well-known Suffolk turkey processing factory (a very sweet act) to embark on a programme of full-time 'A' level study at my local Further Education College (in Lowestoft, Suffolk). I went on to do a degree in Sociology & Philosophy at the University of Bristol, and then to the University of Cambridge for an M.Phil in Social and Political Theory, followed by a Ph.D. (A Wittgensteinian critique of critical social theory).I came to Exeter in 1997, to what was then the Department of Sociology. I was centrally involved, with other colleagues, in reinstating philosophy at Exeter via the Department of Sociology. The department continued to grow and broaden with the addition of anthropology and criminology. Throughout this time I have served for many years as Director of Undergraduate Studies and Director of Education.