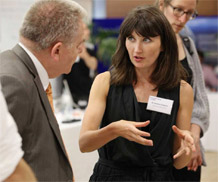 Anderson is an artist and researcher whose practice is at the interface of art, science and philosophy. She is currently Co-investigator on the Arts and Humanities Research Council project ‘Representing Biology as Process’ (2017-2020) with Philosopher of Biology John Dupre and Biologist James Wakefield and works between the Living Systems Institute and Egenis.

Her new book Drawing as a Way of Knowing in Art and Science (Intellect Press) will be launched in October 2017.

Anderson has successfully collaborated on a number of innovative art/science projects. These include ‘Hidden Geometries’ (Leverhulme Trust Artist in Residence Award 2012) in collaboration with the Mathematics Department at Imperial College London; ‘Isomorphology’ and the ‘Cornwall Morphology and Drawing Centre’ (Falmouth University Research and Innovation Award, 2014+2015) in collaboration with the Darwin Centre at the Natural History Museum, London; and ‘Portraits: Patients and Psychiatrists’ (Wellcome Trust Arts Award 2009) in collaboration with psychiatrists and patients at Bethlem Royal Hospital. After studying Fine Art Printmaking at the Royal College of Art and Falmouth University and working on different collaborative projects with mathematicians and natural scientists, she went on to complete a practice based PhD at the University of the Arts London (2015). She was artist in residence for the Northern Ireland Science Festival (2016) and is currently part-time artist in residence at Imperial College (Mathematics department). She has received several prizes and grants such as the Leverhulme Artist in Residence Award, the Wellcome Trust Arts Award, the Thomas Dammann Memorial Trust Award and the Arts Council Individual Artist Award. Her work has been exhibited widely, as for example at the Victoria and Albert Museum, Freud Museum and the Wellcome Collection, London and in her recent solo exhibition ‘Isomorphology’ in London and Berlin. Anderson has been associate Lecturer in Drawing at Falmouth University since 2012 and is currently Drawing Research Associate for The Big Draw UK. She has been a keynote speaker at the International Thinking Through Drawing Symposium, London. Recent publications include ‘On Drawing and Mathematics: From Inverse Vision to the Liberation of Form’ and ‘Endangered: A study of the Declining Practice of Morphological Drawing in Zoological Taxonomy’, Leonardo Journal, MIT Press and ‘Drawing Resemblance and Isomorphology’, Architectural Theory Review, Taylor and Francis. Alongside academic publications, Anderson has produced a limited edition Artist’s Book series including ‘Portraits: Patients and Psychiatrists’ Wellcome Trust, London, and ‘Isomorphology’ with Super-Collider, London and Atlantic Press, Cornwall.