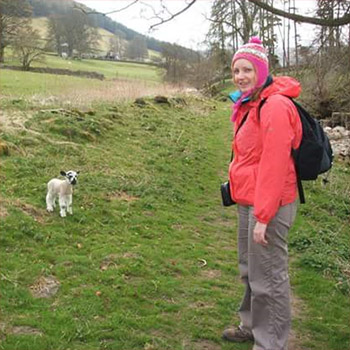 I chose the MA Anthrozoology course in 2009 to improve my understanding of human and animal interactions in addition to furthering my studies. I had studied for a BSc (Hons) degree in Applied Animal Behaviour and Training, graduating in 2005 and then gaining employment within the animal feed industry at a busy feed mill making feeds for livestock with responsibility for quality control, production, quality assurance and then qualifying as a Ruminant Nutritionist in 2011 via a work-based learning course. This MA course appealed to me because it included anthropology, something which I had not studied before, and then combined it with zoology which I had loved studying during my undergraduate degree. I was able to explore the relationships some of my closest family and friends enjoyed with their animals including my mum and her rabbit and my then flatmate and her pet rats. I investigated the anthropological basis for the way in which they cared for and regarded their animals, together with some animal behavioural research on the animals themselves. I greatly enjoyed reading (and being introduced to) ethnographical research literature examining animals and their place within different societies, for example Guajá foragers and their relationships with monkeys in the Amazon, and pigs within different societies in Papua Guinea.

My dissertation explored the trans-special meaning of food between humans and animals. I considered the relationship humans have with food, the way in which some of my close family and friends fed their animals, and then considerations when feeding different groups of people. I now work for Apheya Animal Nutrition as a Nutritionist responsible for auditing manufacturers and suppliers of animal feed both in the UK and worldwide, also delivering training courses for producing safe feed within the foodchain, and consultancy for different companies seeking advice on nutrition and feed production. The course has definitely increased my understanding of why people feed animals in a certain way for both intensive production and as pets.