24th September 2020
Three members of the EASE team (staff members Prof Sam Hurn, Dr Fenella Eason and PhD student Tiamat Warda) presented papers at a workshop on the intersections of critical animal studies and disability studies organised by Dr Birkan Tas at the University of Kassel and hosted by the Institute for Cultural Inquiry (ICI) Berlin.
The presentations can be accessed on the ici Berlin site here.

EASE team co-authored paper 'A Preliminary Assessment of the Impacts of C-19 on Animal Welfare and Human-Animal Interactions in the UK and Beyond' makes top ten downloads on SSRN pre-publication views.

EASE's Prof Samantha Hurn gave a keynote paper at the annual meeting of the Swiss Anthropological Association today (22nd November 2018). Prof's Hurn's talk was entitled 'Be (a)ware of the dog: Anthrozoology, the Animal Turn(ing) and the Evolution of Anthropology' http://www.sagw.ch/en/seg/colloques.html

At the same event, Dr Irina Wenk (EASE and the University of Zurich) also presented on the topic of 'Before consumption: Ambiguous moralities and equine liminality in European horse (meat) production', a project funded by an ERC Marie Skłodowska-Curie Award.

The EASE team working on the project ‘Tails from the streets: Using trans-species ethnography to document, understand and help mitigate the ‘stray dog problem’ in Europe’ have just launched two online surveys, in order to collect data for this research.

Have you fostered or adopted a former Romanian street dog?

Have you encountered former Romanian street dogs in a professional capacity?

If either of the above apply to you, we would be extremely grateful if you could spend a few minutes completing the relevant online questionnaire.‌

You can listen to the interview here. Starting at approximately 1:44:00‌ 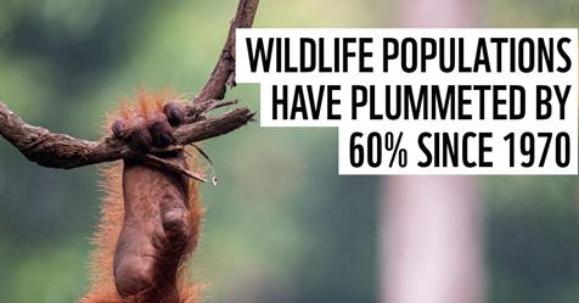 On 2 November 2018, EASE's Dr Steve North presented on the subject of his Umamimi robotic horse ears at the ‘Animal Machines / Machine Animals’ workshop, organised by The British Animal Studies Network and the Life Geographies Group at The University of Exeter.

You can watch Steve's presentation here. 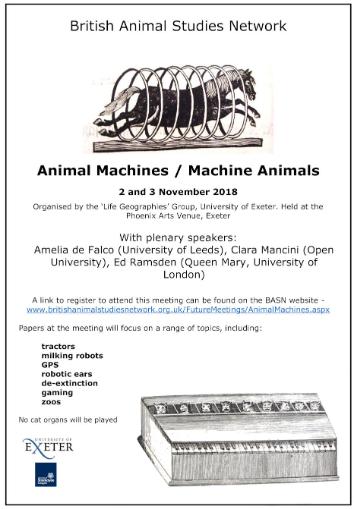 On 20 - 21 October 2018, the EASE (Exeter Anthrozoology as Symbiotic Ethics) working group will be hosting the conference ‘Taking HBCA from Principles to Practice’, organised by Human Behaviour Change for Animals (HBCA)

The field of HBCA aims to make the world a better place for animals, by better understanding the motivations behind human behaviour and considering what drives humans to make behavioural changes.

The emphasis of this conference is on workshops and activities, exploring different aspects of human behavioural change, particularly in ‘real-life scenarios’ (from principles to practice). There will also be opportunities for participants to develop their network of contacts.

The conference will include a program of EASE working group events, including: Michelle Whitham Jones (EASE) facilitating a workshop entitled 'To Click or not to Click; that is our question?'. Professor Samantha Hurn (EASE) and Dr Fenella Eason (EASE) will run sessions on disenfranchised grief and the importance of mourning animals. In addition, there will be an EASE workshop on the ethics of stray animal management.

There will be a plenary talk by Dr Anne McBride (University of Southampton) on ‘The Psychology of Behaviour Change - why, where and how?’, with other speakers to be announced shortly.

This event is supported by sponsors including: The Donkey Sanctuary, Cats Protection, IFAW (International Fund for Animal Welfare) and the Change For Animals Foundation. 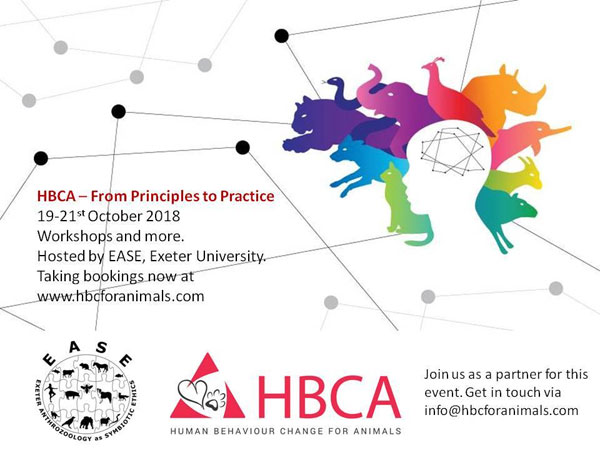 Anthrozoologists from Exeter’s EASE group are currently carrying out Phase 3 of the research project investigating ‘what do we really know about dingoes and the people who interact with them?’

The ‘Tails’ project is concerned with documenting and understanding the lives of former stray dogs. In earlier phases of the project, Professor Samantha Hurn and her team conducted an intensive period of pilot research in Romania, studying the impact of legislation introduced to control stray dogs through euthanasia.

In the latest phase, EASE will be in New South Wales, focusing on the dingo and carrying out interviews and observations with individuals who live with, rescue, rehabilitate and rehome this species, to the south of Australia’s dingo fence.

The researchers will address questions such as:

Academics and PhD students from the EASE team, led by Professor Samantha Hurn, recently spent an exciting few days as major contributors to a prestigious conference in Sydney Australia. Now in its 27th year, the theme of this year’s International Society for Anthrozoology’s conference was ‘Animals in Our Lives: Multidisciplinary Approaches to the Study of Human-Animal Interactions'.

Ease ran their own symposium: 'Anthrozoology as symbiotic ethics and the ethics of anthrozoological research' with twelve of the team making the journey Down Under whilst other academics presented remotely via video.

The team contributed on a range of topics relating to human-animal interactions ranging from Dr North’s presentation on ‘Computational Anthropology’ to Professor Hurn’s talk on ‘Evaluating anthropocentric versus caninocentric attitudes and approaches to stray dog management’ The symposium was a great success with the team receiving excellent feedback from delegates.

This year's MA Anthrozoology Residential will take place in the Forum on Streatham Campus from 27-29 April 2018. Registration can be made by emailing Jess Groling (j.s.groling@exeter.ac.uk) and informing her whether you wish to attend as an accredited student, taking the ANTM107 Residential module as part of your MA, or as a non-accredited attendee.

We very much look forward to welcoming Francoise Wemelsfelder (How animals communicate quality of life: the qualitative assessment of behaviour, 2007) and John Bradshaw (The animals among us: the new science of anthrozoology, 2017) as key speakers. They will be joined by staff and PhD students of the EASE (Exeter Anthrozoology as Symbiotic Ethics) working group and by MA Anthrozoology alumni in presenting lectures, seminars and group discussions over the three days.

Vegan refreshments including lunch will be provided each day by the university's Fresh Ideas.  Herbies are hosting a vegan buffet dinner on the Friday night. Booking and menu details, as well as a list of B&Bs/hotel accommodation, are available on the ELE ANTM107 webpage.

EASE Director Professor Samantha Hurn, and Dr Irina Wenk from the University of Zurich have been awarded an ERC Marie Skłodowska-Curie Fellowship! The award will bring Dr Wenk, a social anthropologist specializing in indigenous rights and human-horse interactions, to join the Exeter Anthrozoology as Symbiotic Ethics (EASE) working group for a period of two years. During this time, she will participate in EASE activities (including contributing to teaching on the MA Anthrozoology) and will conduct research for a project entitled ‘Before Consumption: Ambiguous moralities and equine liminality in European horse (meat) production’. 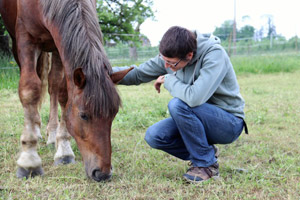 View the EASE submission on www.parliament.co.uk.

EASE researcher graduates with the world’s first PhD in Anthrozoology!

Dr Fenella Eason, who was also the first person to graduate from the MA Anthrozoology programme, has achieved another world first! Fenella graduated from Exeter’s PhD Anthrozoology programme in December 2017. Her thesis, entitled 'Doing diabetes (Type 1): Symbiotic ethics and practices of care embodied in human-canine collaborations and olfactory sensitivity' was a beautifully crafted example of multi-species ethnography and was based on research conducted with UK charity Medical Detection Dogs. 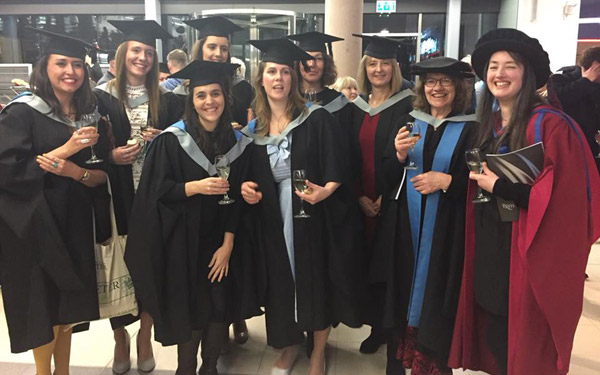 The EASE team have just submitted evidence to the EFRA (Environment, Food and Rural Affairs) Commons Select Committee, who are conducting pre-legislative scrutiny on the draft Animal Welfare (Sentencing and Recognition of Sentience) Bill.

This bill is the Secretary of State for Environment, Food and Rural Affairs (The Rt Hon Michael Gove MP)'s response to recent public concern about the UK government appearing to omit EU legislation on 'animal sentience' (Article 13, Title II, The Lisbon Treaty) from the EU Withdrawal Bill.

When Green Party MP Caroline Lucas tabled 'NC30 - New Clause 30 of the EU Withdrawal Bill', this was voted down by parliament. There was great public concern that legislation for the protection of animals would be weakened, in a post-Brexit UK. Michael Gove promised to reinstate the recognition in UK law of animal sentience and the Animal Welfare (Sentencing and Recognition of Sentience) Bill is his response.

The MA Anthrozoology course will be holding its three-day residential module on 27-29  April 2018.

This will be organised by Dr Jessica Groling and Dr Fenella Eason from EASE.

Fenella Eason, Kate Marx and Thomas Aiello presented on aspects of their research at the annual Sociology, Philosophy and Anthropology conference. Fenella talked about the multi-disciplinary nature of Anthrozoology during a roundtable discussion on inter-disciplinarily, Kate discussed findings from her research on human encounters with wild animals on the Appalachian Trail in the USA, and Alexandra discussed her research on pig sacrifice in Romania. 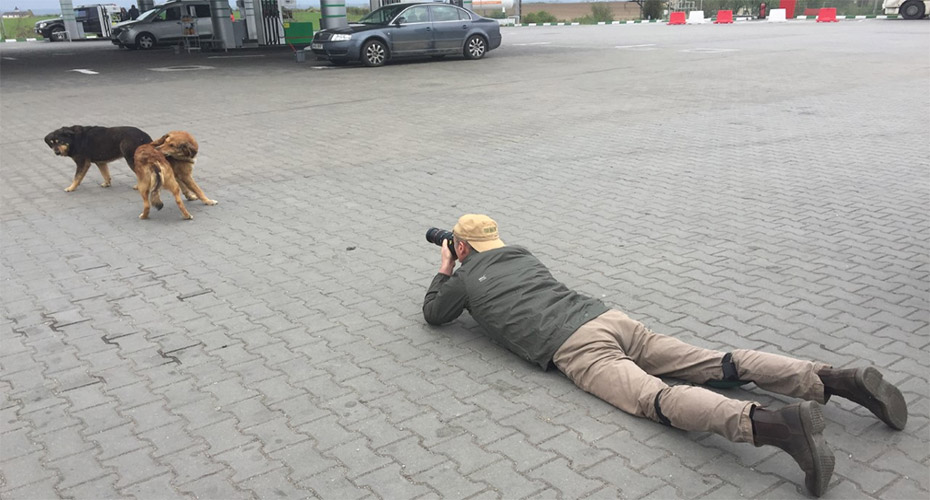 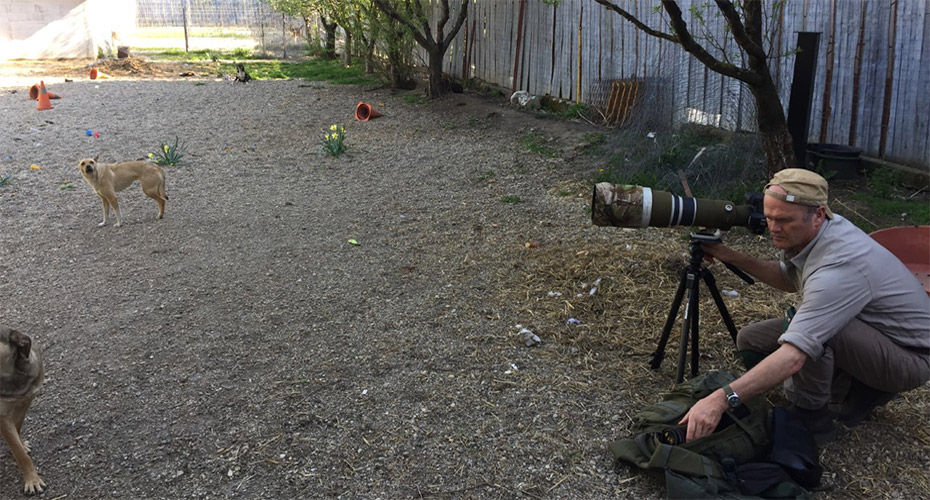 Internationally renowned natural history photographer, documentary filmmaker and TV presenter Simon King MBE has recently completed a residency with EASE when he joined researchers in Bucharest for a week in April 2017. Simon's artistic work has traditionally focussed on documenting the lives and deaths of wild animals around the world, but during this residency he turned his attention to an example of a domestic species gone wild! Simon was tasked with capturing Romania's stray dogs on film.

His stunning photographs will form the basis of a catalogue of images which will be used to explore the possibility of teaching a computer programme to accurately recognise canine behaviours. The programme will be developed by EASE postdoctoral researcher Dr Steve North, who has previously worked on developing software to recognise equine behaviours. However, given the phenotypic variation which exists within the species canis familiaris, a database of as many different high quality images of different dogs as possible will be needed! More information on this ongoing project will be posted in due course, along with an invitation to contribute your own images and videos to the database. Watch this space!