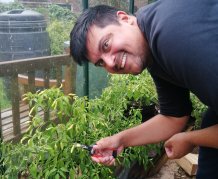 University of Exeter researcher, William Jaggard, is an expert on the plant and passionate about its place in cookery and horticulture.

The hot and spicy history of the chilli plant will be on the menu as part of a special hot chocolate-themed event in Exeter.

Chilli peppers are eaten by a quarter of the earth’s population every day. This history of the plant shows the story of migration and social changes around the globe.

University of Exeter researcher William Jaggard – known to his friends as “chilliam” – is an expert on the plant and passionate about its place in cookery and horticulture. He has been asked by the Exeter Seed Bank to be a guardian for the chilli.

At the free event, at the Exeter Phoenix Arts Centre, William will discuss the history of chilli peppers, which were first domesticated around 6,000 years ago in South America. These domesticated peppers were eventually taken outside of the Americas by Christopher Columbus in 1492 with chillies then spreading and reaching Eastern Europe and Western China in the 1550s.

Attendees will be able to enjoy a delicious mug of hot chocolate laced with chilli.

The chilli plant emerged in South America 16.8 million years ago and it is part of the “nightshade” group, which also includes potatoes, tomatoes and tobacco.

There are five main domesticated chillies: the mild and easy to grow C.Annuum – domesticated in Mexico and North Central America with popular examples being cayenne and jalapenos; C.Chinense, grown in Amazonia and known for hot chillies which are harder to grow with some notable examples like scotch bonnets, habaneros, ghost; C.Pubescens, found in the southern Andes; C.Baccatum from Bolivia and C.Frutescens from the Caribbean, which has the closest resemblance to wild varieties of chilli and is the variety Tabasco comes from.

The heat of the chilli comes from the capsaicin, which evolved around 13.8 million years ago and binds to our nerve receptors to give feeling of heat and fire.

Chillies were brought to Britain in the 1540s and mainly grown as an ornamental plant. It took until the twentieth century did its culinary popularity start to take off.

In the 1980s and early 1990s there were few native British chilli growers, and a limited amount of individuals commercially selling chilli. However, in 2006 the Dorset Naga was ranked as the hottest chilli in the world, and this led to more and more producers growing chillies and producing artisan sauces, jams and pickles, with an emphasis on flavour not just heat.

Although hot sauces have been around for thousands of years, the first commercialisation of the condiment occurred in 1803 with Tabasco developed soon after in 1869, while chilli powder was created in the Victorian era (1896 by William Gebhardt). The Scoville scale for measuring how hot chillies are were created by Wilber Scoville in 1912. In 2021 the first chilli was grown and eaten in space.